Now Versus Then (How I spent my weekend)

I had a wonderful time today!

Last night, after doing Walmart/Spark deliveries all day, I went home, fixed a gallon of tea, grabbed my pole and fishing gear, and then decided that I would take Milo, too, to my parents' camp at Clear Springs and spend the night.

Otis wanted to go, and I think it hurt his feelings that I didn't take him, too, but I knew one babydog was all I could handle. And Milo was a handful!

We saw deer in the pasture on the way to the camp. Milo wanted to jump out the window of the car and chase them. I had to get on to him and make him lay down in the seat so I wouldn't wreck the vehicle. 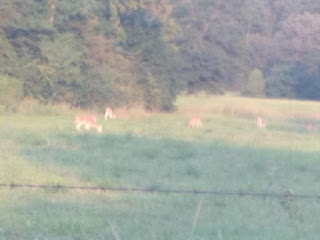 We got to the camp and Milo had to water all the trees and find a place to do his "business". Then he wanted to explore. I kept threatening to go get my flyswatter if he didn't come back where I could see him. And, he made sure to bark a good hello to Paw Paw and MeeMaw (who kept calling him "she" and being corrected).

I found a place to tie him up and give him food and water so I could properly visit the parents and niece. 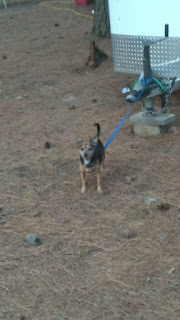 Milo and I later took a walk down to the swimming area. It was a long walk, so when we got back, he didn't fuss much about being tied up outside. He was tired. He didn't even bark all night.

As soon as daylight hit, though, we heard him barking. I figured he figured out that he had stayed outside all night long, which was something he NEVER does. But, when we looked out the door, there were about 5 deer standing across the road looking at him. He was talking to them. Loud. They didn't know what to think about HIM.

I threw out some corn and went inside to get ready for our fishing adventure. The deer made their way to the back of the camper as we sat and drank our coffee to wake up. We watched them out the window. They were brave. They kept one eye on Milo, though, just in case. 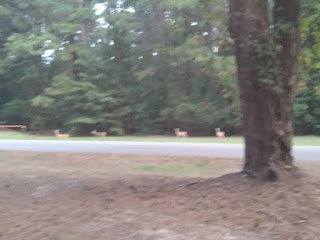 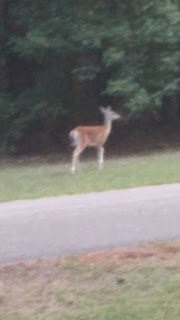 Then, we left Milo there to watch the camp for us while we went fishing.

I caught three catfish and one brim - barely keeper size. Between the four of us, we caught 25. Then we went back to the camp.

While my step-dad cleaned the fish, Milo and I went to the swimming area to jump into the water. The sign said, "No pets allowed, and there were people there, so I had to leave Milo tied up with the vehicle while I went swimming. There were others in the water, or I would have ignored the sign.

Then we went back to the camp to rest. My step-dad and niece fried the fish, and some shrimp and some french fries. We ate. Then I told mom I needed to go home. I still have work to do there. And, I have to work tomorrow. I might do it again next weekend, but I wouldn't be spending the night (that bed was UNCOMFORTABLE).

Otis was happy to see us. I gave him a chicken treat and he guarded it (instead of eating it) like it was his "precious", and he warned Milo for 30 minutes not to touch it.

I took a much needed bath, then took out the trash and made some tea, and threw some clothes in the wash, and washed the dishes. Then I decided I needed to sit down and rest. So, here I am.

20 years ago today, I was woke up by the editor/owner of the Sierra Times, yelling at me to turn on the television.

I tried to calm him down as I complied.

"Surely it is just a horrible accident!"

About the time I said that, the second tower was hit.

I got off the phone and called my kids.

I pray to God we never see another one. I praise God for the 9/11 I had today.