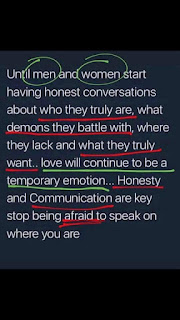 Learned this. Not going to be who I am not around anybody. Why I am not afraid to post EVERYTHING about my life. The good, the bad and the ugly. I've learned by doing this that I am NOT. And, those who complain about it have something to hide...always. I don't. I am me. Like me, love me, hate me, I don't care. The only person I care about judgment from is God, and hiding things about myself from other people is not going to change the fact that HE already knows.

Email ThisBlogThis!Share to TwitterShare to FacebookShare to Pinterest
Labels: Honesty

When I was young, there were several times that I thought I had found "the one". Each time left me hurt, angry, feeling betrayed, unwanted, unneeded, or even objectified. I gave all I had in each only to be disappointed.

It wasn't until this last relationship ended that I realized that I had been giving all I was and all I had to the wrong person. I decided it was time to correct that.

Now, I am able to give all I have and all I am to the One who created me for His own glory. In return, He has sustained, strengthened, upheld, protected and provided for me in ways I never imagined were possible.

Yes, I have stumbled in my desire to please Him, but I have immediately stood up each time and dusted myself off and "straightened my crown," determined that weakness was temporary, and love was eternal.

As a single Christian, I find myself able to do things that I know that should I have a mate, would be missed. Like, acting on impulse to bless someone else, or openly showing my gratitude to others for what my husband should be providing.

Then, I felt so alone and hopeless. Now I find that I am never lonely, even when I am alone. I have discovered new ways to fill the void that being single often leaves on others -- ways that I would not be as free to practice if I had a mate.

I am FREE to be TOTALLY ME; the person God created me to be.

I find myself in total agreement with Paul as I live out these words of wisdom from the Holy Book:

1 Corinthians 7:
32 But I would have you without carefulness. He that is unmarried careth for the things that belong to the Lord, how he may please the Lord:

33 But he that is married careth for the things that are of the world, how he may please his wife.

I have also found that I have no problem being single and being able to celebrate the marriage and happiness of my friends who have reached milestones with each other in their own lives. To each his own. What is given for me to be and do is not so for others.

Having said that, I am extremely Happy for my friend Rosa Edwards today as she and her husband celebrate 24 years of marriage.

I wrote a poem when I was 12 years old one day, doodling on my book cover in class, that goes something like this:

I look my eyes up to the sky
And ask the Lord above so high
"Why me?" Then comes from the blue,
"Because, my child, you are YOU!"

I praise God for who I am today. And like Paul, I wish to remain single, and I would that others could have the experience I have had being so.

Colossians 3
23 And whatsoever ye do, do it heartily, as to the Lord, and not unto men;

I have endeavored to be the best single person I can be for the Lord.

The song below says everything I have said above. It fits perfect. 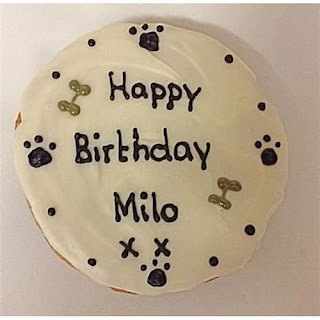 I told my abusive, drug addicted ex that I was with for nearly 3 years at the time, that I wanted a chihuaha. So, on one of his trips out of town, he procured me a baby girl. He was unable to bring her home because she was still too young, and he would have to work for her. I knew that he often lied to me to get something he wanted, and I wondered what his angle was this time...

But, I made plans anyway. Expect the worst, hope for the best. That was my motto.

The year was 2012. The Mayans said the world would end that year. So, I decided that in order to remember when I got her, I would name her "Maya."

It was in January that he finally brought my baby-dog home. He was tiny. He could barely fill my hand. He was only nine weeks old. And, he had a broken tail that made him look special. My ex said the little girl died, so he got him instead.

It didn't take me long to figure out a name for him. Something close to "Maya". I decided to call him "Milo".

As he grew used to his new surroundings, as all puppies do, he became extremely playful. He loved to attack our feet as we walked across the floor. He loved wrestling my hands, and jumping on my face when I would play peek-a-boo.

Milo came to accept me as "momma", and he also knew I would do anything to protect him.

We never knew what mood my ex would come home in. And, my ex had bad feet. So, one day, when Milo innocently attacked his feet as he came in the door, My ex went into a rage.

Milo ran as fast as his little feet could carry him across the slick floor. I was sitting in a chair. He literally climbed up my legs as if he were a cat and immediately buried his face in my chest. I immediately covered him with my hands as he whimpered.

My ex was yelling, "I'm gonna KILL that d*** dog!" and was chasing him. As I covered Milo with my hands and held him close to me, I immediately rose up and got in my ex's face and said, "No, you will NOT. You aren't going to do ANYTHING to hurt this baby."

I guess he didn't know what to think of the look on my face, so he backed down.

I guess, from that moment on, Milo got the message that I was his guardian angel. We became closer than ever.

At night, Milo would snuggle up to me and look at me with those adoring eyes and fall asleep. In the morning, Milo would lick my face until I was awake to take him outside.

When my ex got violent with me, I know Milo felt helpless. He would sadly stare at us and whimper quietly as he sat as far away from us as possible. I was HIS guardian angel, and he was too little to protect me. I was so afraid that if he ever tried, my ex would kill him in a fit of rage.

When I finally got rid of my ex, It was the last time he got violent with me. I was working at a hotel that allowed me to have a room for a couple of nights for free. on the second night, I called my ex and told him that I wanted him to leave.

My ex balked. He said I couldn't ask him to leave. He was on the lease. I told him, "Okay, have it your way. I'll be there with the police tomorrow. I will be pressing charges on you." At that point, he agreed to leave.

"Oh, and by the way, when you leave, you will leave my dog there. And, if I find that ONE hair on his furry little body is hurt, I will put you UNDER the jail."

When I got home the next day, my ex was gone. Milo was SOOO happy to see me.

When I finally threw my ex out for the last time, Milo seemed to take on a more confident personna when he realizes that that mean guy wasn't coming back. I had packed all my ex's stuff in boxes and contacted him to come pick it up.

It was about 2 months before my ex finally came to get his stuff.

We were outside. Milo was on a leash. My ex was in a truck with another guy as they drove up, Milo started growling. Somehow, he KNEW that that mean guy was in that truck. It was as if he could smell him. Milo never did that with any other vehicles that drove up.

When my ex got out of the truck, Milo went into attack mode. He barked harder and louder than ever. He was growling and gnashing his teeth. He was ANGRY.

It was as if he was saying, "NO. YOU ARE NOT COMING BACK IN THIS HOME!"

I have never seen Milo like that. Milo had found his courage. Milo was backing up his Momma. He was a pitt bull in a chihuaha's body.

All the neighbors knew and loved Milo when he came outside. Milo would always give them a Happy Bark to say hello. I immediately took Milo into my arms as he gnashed and growled, and my ex got his stuff and left with tears running down his face. I guess he realized how much of an ass he really had been at that point.

The neighbors said, "Yeah, Milo knows one when he sees one."

Milo and I lived happily ever after. We had been through so much together. We have a special history that Otis will never know.

I don't know the exact date he was born. I know it was in November of 2012. So, I'll choose this day to say Happy Birthday, Milo, My Love.