Tough: If You are Going through Hell, Just Keep on Going!

I was raised that unless I was too sick to get out of bed and walk to the bathroom on my own, I was going to go to school.

I was raised that if I didn't eat all my supper, I'd get it for breakfast.

I was raised that if I whined about anything, I'd get something from my mom to cry about.

I was raised that if I fell down and scraped my knees, rather than being coddled and babied, I was told to get up, dust myself off and keep going.

I was raised that if I didn't work, I didn't eat.

I was raised that if I made my bed, I slept in it.

I was raised that if I wanted something, I had to earn it.

I was raised that if I lost the race, there was no trophy to take home. The only recognition I was afforded was that I didn't stop until I crossed the finish line. If I stopped before then, I was labeled a "quitter" -- whether I won or lost.

I was raised to not have excuses. There is a solution to every problem. Where there is a will there is a way. (Some people wonder where I got my "stubbornness" from).

I was raised not to fight -- but if attacked, and I didn't fight back, I was busted again when I got home. And, if I got into a fight with family, I was forced to fight them until we couldn't fight anymore in the front yard. (Okay, that didn't happen, but it was threatened at one point...LOL)

I was raised that if I was working, and I was tired, not to complain until I was finished with my work. Tiredness was no excuse not to do what needed to be done.

And I was raised without praise for doing my chores. Why be thanked for what I should already be doing in the first place?

I was raised that the ONLY time I went to a doctor was if there was something I could not fix on my own -- like a broken bone, a concussion, or an illness that was getting worse no matter what I was doing, not better.

And a scar was just a permanent trophy of my toughness -- not my beauty, which went hand in hand with "never judge a book by its cover" and "beauty is only skin deep"

I was taught to face my fears and that if I am going through hell, to keep on going.

I have had people tell me I am the strongest person they know.

Well, this is why.

To hear some people talk, all of the above could be considered child abuse. In my opinion, raising children who refuse to take personal responsibility who are weak-minded and full of complaints and thinking they are entitled is the worse abuse you could put on a child. The American Spirit only thrives in toughness.

Email ThisBlogThis!Share to TwitterShare to FacebookShare to Pinterest
Labels: tough

If I was still home schooling, I would have made it mandatory for my children to watch every minute of the Republican National Convention of 2020 AFTER watching the DNC 2020. Then, we would have discussed what we had heard and what their opinions were and why. We would discuss their concerns. I would see through their eyes, then I would give them mine as a result.

I recall when I stood before the Austin Commissioner's Court after Commissioner Karen Sunlightner remarked on television when my children were watching one day that "Homeschoolers are nothing more than trailer trash that don't even own property."

We lived in a beautiful 3 bedroom home with a big back yard that we were buying at the time. My husband worked for one of the biggest law firms in the country.

5 minutes later, I was standing before her demanding that she apologize to my children who were watching her -- while they were still at home, watching their mother defend them AND their education!

I told her that day, "Miss Sunlightner, I am raising my children to be LEADERS, not FOLLOWERS. THAT is why I home school!"

My 5 year old son met me at the door when I drove back into our driveway after. The look in his eyes as he ran and hugged me, I will NEVER EVER FORGET!

"THAT'S MY MOMMA!" they seemed to say!

If I had any question in my mind as to whether or not I did the right thing that day in front of my children, it was answered right then and there.

Below is a rendition of what homeschooling is like for COVID 19 parents. The difference between doing it because you want to and because you have to is right there. I would do it again in a heartbeat. I wouldn't trade the quality time with my kids for the world.

I was a REAL Home School Champion!

It's been a bit since I updated this blog, hasn't it?

Well, I returned to work at the Pitt Grill, where I am now working the day shift -- and helping to train all of the other shifts to do their job correctly. The manager left, then one assistant manager quit, then the other quit, and I just happened to be the strongest cook they had so I got promoted to day shift -- which I LOVE, by the way!

Today my boss showed me a little bit about how to count the drawers down, which, I haven't done because I am not a waitress - I'm a cook.

I splashed oil from flipping an egg into my face today. My boss just look at me when I hollered out in pain. I told him he should give me a raise for not cussing. LOL I'm just glad I had my glasses on so none of it got in my eyes.

I was afraid I would have a bubble come up on my face, but other than a little discoloration, it didn't happen. I can still feel where it burned me, but it's going to be okay.

Three days ago my computer crashed. I had to sell some of my mutual funds to ensure that I could pay my lot rent on my mobile home so I could buy a new computer -- which seemed impossible. I went to four different stores and none of them had any computers with-in my budget available. Both Walmarts were completely sold out even.

Today after work, I went back to the local Walmart and was happy to see that they actually had some computers available! I bought a Hewlett Packard Laptop.

After setting it up at home, I was finally able to place my Avon order and catch up on some work I have not been able to do online. Still got some catching up to do, but I'm done for the day.

My "imaginary friend" (I call him imaginary because I never get to see him) brought me a burn barrel to burn some yard trash in. I've been making real good use of that on an almost daily basis. Best thing I've acquired in a while, besides my computer!

And, I'm back to buying stocks again. I figure I need to start saving money for things like paying off medical bills and getting my plumbing at home fixed.

I hope I stay there.

Email ThisBlogThis!Share to TwitterShare to FacebookShare to Pinterest
Labels: Pocket Full of Sunshine

Why did God tell Hosea to Marry a Prostitute? 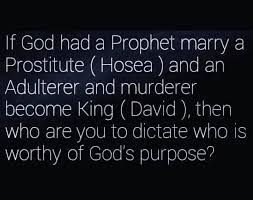 I read the book of Hosea, and I have thought and thought about it: WHY in the WORLD would God want Hosea to marry a prostitute? According to the story he had nothing but bad with her.

I can understand that God wanted to teach Hosea to love like God. But for what purpose? What did all this accomplish for anyone but Hosea?

Then, I started thinking about all the things out there that people did saying that they felt they were "led by God", but it didn't turn out so well. And, I remember my pastor at the 1st Bikers Church in Texarkana preaching that we should always be SURE we are being led by God before we act, that God would never lead us to do anything that went against His Will...and you can find His Will in the Bible.

I wonder what scriptures led Hosea to marry a prostitute? (Which also made me wonder if, in fact, maybe all those people who went wayward, thinking they were led by God, may have really been led by God!)

FINALLY, it dawned on me that it wasn't the fact that he married a prostitute that was the lesson -- and aside from learning how to love like God, the assignment wasn't the prostitute AT ALL!

The assignment Hosea was given by God was to TELL THE STORY.

ALL of us have gone and done some pretty wayward things and wondered how God could use our experience to teach a lesson.

The answer is this:

WE ALL HAVE A STORY TO TELL. And it is our story that leads others toward the right paths.

Email ThisBlogThis!Share to TwitterShare to FacebookShare to Pinterest
Labels: story

God knows my heart. I've prayed until my tears can fill up a bucket.

I know God never ignores prayer. There are three answers God can give to any prayer: "Yes". "No." And, "Not right now."

I keep praying that His "No" is just a "Not right now." I also pray for a door to finally shut -- either the door in front of me, or the door behind me.

If the door behind me shuts, I have finally received what I have been praying so fervently for. I can move ahead with new life, and new energy...and new dreams.

I want for that door to shut so much!

If the door in front of me shuts, then I know there is no point in praying more for what I am hoping for. The decision has been made. It's final.

I want for that door to shut just as much!

I also know that God can open closed doors when He wants to. He has proven that to me time and again...but to know that the door in front of me is locked and sealed shut is to accept that I need to move on completely, without looking back at the struggle that got me there. To accept the futility of knocking any more. If it should open again in the future, then I will again be on my knees praying again. But, I want peace in my heart about the prayer for right now.

I just would rather have the pain of finality than the pain of the waiting for an answer.

I am reminded constantly that I am not God.