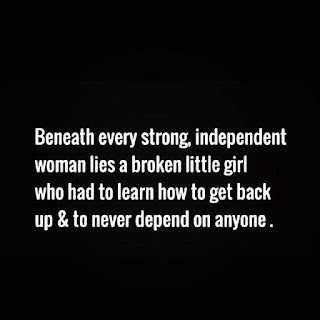 This post was originally written on October 19, 2015. Five years ago. Still true today for me, so I thought I'd share.

Broken? No. I never considered myself broken. I shook my fist a lot at a world that was unfair and deceptive. But, something in me just kept saying that life is what you make it. And, it's gotta start somewhere. The buck stops here. And, so forth.

I made the Bible my guidebook, even when I wasn't following Jesus the way I should have been. I trusted that there was a God and that He knew better than I did...or even my parents did. I determined to have faith, even when I didn't believe.

I saw things with the eyes of someone of scrutiny. I kept my back to the wall, and never went into a crowded place without knowing where the door was. And, I watched. I treaded the waters lightly.

Every now and then I would jump in head first, determined to sink or swim. Sometimes I thought I would drown...other times, I found a rock to stand on. All the time, I overcame the current.

At first, I was angry. My anger started turning to bitterness. Then, I realized that the sunrise on every new day was majestic -- and that beauty was in the eye of the beholder. I had a choice to make.

Life is what it is. Sometimes you sink, sometimes you swim. But, sometimes, if you just float, you can take the time to enjoy the scenery, breathe easier, smell the fresh air.

I look in the mirror today and I don't see a survivor, The fact that I am still there in the mirror looking back at myself tells me that the struggle was worth it, and I am an OVERCOMER.

Email ThisBlogThis!Share to TwitterShare to FacebookShare to Pinterest
Labels: Overcomer